HOME >>
News >>
The price rise of passive components starts, and MLCC and chip take the lead

The price rise of passive components starts, and MLCC and chip take the lead 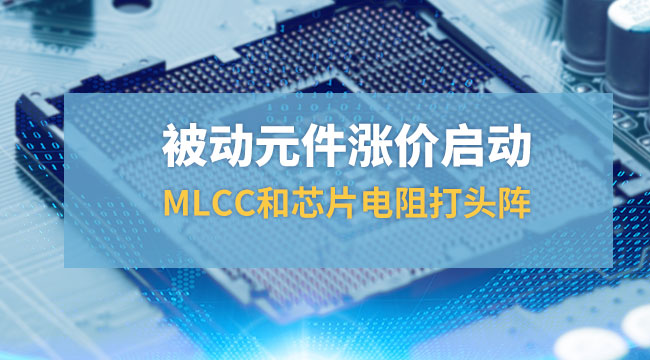 According to a recent report by Taiwan media, Samsung motor and TDK, the two original manufacturers of MLCC, recently issued a notice to customers of front-line assembly plants, emphasizing that the supply of high-capacity MLCC is tight and will increase its quotation. In the chip resistor market, Taichang Guoju officially announced a price increase of 15-25% from March. Then, huaxinke also issued a price increase notice to the agents, and the new orders will increase by 10-15%.

In the two major passive component markets, the price of chip resistance has been raised by wangquan before Guoju and huaxinke. Now the three major manufacturers are rising together. In the short term, the rise of chip resistance will fully cover all links from the original factory to distributors and then to end customers.

In contrast, MLCC has been in the original factory & ldquo; Blowing & rdquo; In the early stage, it was only rumored that the delivery time of Murata and other factories was lengthened, and some agents raised the price. Compared with last year, there is more demand for 5g mobile phones and automotive electronics this year, and there will undoubtedly be more room for the price increase of various ICs. Passive components also follow the same law, and the supply will be more in short supply in the later stage.

When it comes to the driving force of the price rise of passive components, the price rise of upstream materials occupies the primary position. Before the Spring Festival, it was reported that Sanhuan group, a ceramic substrate factory, negotiated with major chip resistance factories and sought to increase the price of ceramic substrates by 10-15% from February. After that, wangquan, the second largest resistor factory, announced that it would raise the order price of thick film resistors for customers in Greater China by 15% after the Spring Festival.

From this point of view, the result of the price negotiation between the resistance factory and Sanhuan group should be unsatisfactory. Therefore, wangquan raised the price first to ensure the profit level. Now Guoju and huaxinke have also raised the chip resistance price, and the upstream factors should account for an absolute proportion.

In addition to ceramic capacitors, the prices of copper, aluminum and other metals and packaging materials are rising recently. Once the pressure from the upstream exceeds the limit, the original factory will inevitably transfer the extra cost to the market, resulting in the price rise of the whole industrial chain. This has been confirmed by the rise in chip prices, and it is no exception in the passive component market.

In addition to the price rise of passive components caused by upstream factors, the frequent changes of manufacturers themselves are also constantly affecting market sentiment. The buyer's willingness to prepare goods is fully mobilized, which will eventually lead to price rise.

Japan is one of the world's major production areas of passive components. At the beginning of the year, due to the snow disaster and epidemic situation, many factories in Murata in Japan often shut down, impacting the supply of passive components in the market. According to Taiwan media reports, Murata frequently & ldquo; Off chain & rdquo; The market worried that the delivery time was lengthened, so some mainland agents began to increase the price to buy Murata MLCC, and the price rise began to appear.

In February, the earthquake in the Fukushima sea area led to the shutdown of some factories in Murata. Outside Japan, another major MLCC plant AVX in Penang, Malaysia, was shut down for 10 days from February 1 due to the epidemic, mainly affecting the automotive MLCC market.

Although these discontinued factories have returned to work one after another, and the industry has confirmed that they have little impact on MLCC supply, frequent changes in the supply chain still aroused the buyer's willingness to prepare goods, and the flame of price rise was ignited.

Recently, Taiwan media reported that a mobile phone assembly factory received news from Samsung motor and TDK, saying that the supply of high capacity MLCC is tight and customers should be prepared for price increases. At present, the price rise of MLCC is indeed imminent. Once the above two factories implement the price increase, Guoju, Murata and other large factories are also likely to follow up.

To get rid of out of stock and rising prices, we should look to mainland manufacturers

Considering the upstream supply and the original factory's own factors, it can be seen that the supply of the passive component market has been eroded, which has led to a further widening of the supply-demand gap. Passive components & ldquo; Be alone & rdquo; It's hard to do. People in the IC circle need to be prepared to deal with shortage and price rise.

In the long run, as emerging demands such as 5g and automotive electronics are in an explosive period, the situation of short supply of passive components may continue for several years. With the huge scale of China's electronic manufacturing industry, we need to localize the supply of passive components in order to get rid of the problem of shortage and rising prices.

The outbreak of emerging demand provides huge industrial opportunities. Not only large international manufacturers can make more profits, but mainland manufacturers can also take this opportunity to realize technological innovation and capacity expansion, so as to reduce the external dependence of the local electronics industry.

Next： The memory market has turned upside down and the price has risen!